On June 30, 2020, Abbaye Sainte-Marie de Lagrasse (Lagrasse Abbey) was announced as one of 18 emblematic sites to benefit from the Loto du Patrimoine in France. 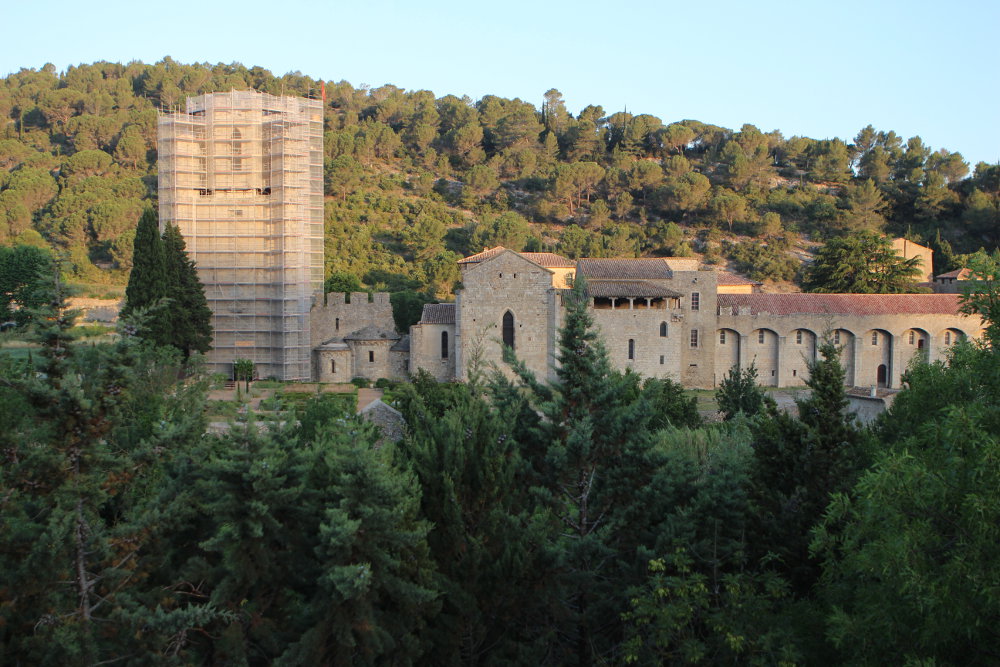 A portion of sales from the Loto du Patrimoine 2020 (Heritage Lottery) tickets are dedicated to fund the restoration and preservation of historic monuments that make up France’s cultural heritage.

The 18 sites chosen reflect the diversity of French cultural heritage. This year, the list includes a viaduct, fort, cathedral, Roman theater, and Creole home, in addition to Lagrasse Abbey.

The announcement was made by Loto du Patrimoine representatives Stéphane Bern and the Minister of Culture.

Lagrasse Abbey: Over 1,200 Years of History

Lagrasse Abbey is one of the most prestigious religious monuments in the South of France, and its community welcomes over 20,000 visitors each year. The abbey is located about 20 miles south-east of Carcassonne, in the Aude department of Languedoc-Roussillon.

Peaceful and serene, Lagrasse Abbey is an indelible part of the landscape. With its ochre buildings complementing the surrounding green trees and blue river below, the abbey, which has stood in this place for over a thousand years, is the picture of tranquility.

Legend has it that Charlemagne, making his return from Spain, spotted seven hermits who lived in Lagrasse on the banks of the Orbieu River. Inspired by their holiness, he decided to found a monastery in that spot in 779.

From that time, the Abbey Sainte-Marie de Lagrasse prospered, and was settled in the 17th century by an order of Benedictine monks, who rebuilt the main courtyard and the cloister. The architecture of these renewed spaces coexists with the Romanesque elements of the abbey and the Renaissance style of the bell tower.

During the French Revolution, the monks were driven out and Lagrasse Abbey was looted. The building was then sold by the government and served as a hospice and subsequently as a home to a religious community, serving various purposes through the generations until the 1990s when it was owned by different private owners.

In 2004, a small community of Canons of the Mother of God took up residence and reclaimed Lagrasse Abbey – then abandoned and desolate – but full of history. Driven by their charisma, dedication and hard work, they set about restoring the abbey to its full potential, shining new light on its architectural beauty.

Today, while there is still more work to be done, the community is thriving and the number of visitors to Lagrasse Abbey is also increasing. The Canons welcome over 20,000 visitors each year.

To complete this ambitious project, Lagrasse Abbey’s community and volunteers put together a fundraising campaign to raise the money needed for the necessary restoration works. Called “Revive Lagrasse Abbey” in English, the campaign seeks to raise $6.7 million by 2024.

With the proceeds from the Heritage Lottery, Lagrasse Abbey will be able to partially fund the restoration of its bell tower.

Restoration works began in 2019 and are divided into three phases due to be completed in 2024. Each phase focuses on a crucial component of Lagrasse Abbey.

About the Loto du Patrimoine 2020 Edition

In 2017 President Macron entrusted Stéphane Bern with the mission of identifying the heritage assets at risk, with the support of the services of the Ministry of Culture and la Fondation du Patrimoine (Heritage Foundation), and proposing innovative sources of funding in order to safeguard them. To this end, Stéphane Bern had the idea of launching, along with the FDJ (Française des Jeux), the Minister of Culture and la Fondation du Patrimoine, le Loto du Patrimoine (the Heritage Lottery), therefore involving millions of small donors coming from all backgrounds.

Stéphane Bern is a radio and television host known for his passion for French history and preserving French cultural heritage. His broadcasts have contributed to make him an emblematic figure of the French audiovisual landscape. In this way, he has raised the profile of his mission and therefore made it possible to renovate even more monuments deemed “in danger”.

This year marks the third edition of the Loto du Patrimoine. For each Loto du Patrimoine edition, a shortlist of 18 emblematic monuments is selected and the money raised funds restoration and preservation efforts. The selected monuments are chosen for their significance to France’s cultural patrimony, and for their ability to revitalize the local economy, therefore creating a lasting investment over time not only to the monument, but to the local communities.

The FDJ (Française Des Jeux), donates a portion of lottery and scratch tickets sold to the Fondation du Patrimoine, which aims to save and renovate historic monuments in France and French territories.

Nearly 47 million euros (over $55 million) were paid to the Fondation du Patrimoine for the 2018 and 2019 editions. Among the three hundred and ninety projects selected by the “Mission Patrimoine en Peril” (“Mission Heritage in Peril”), 39 sites have already been restored and 129 are currently in the process of being restored.

American Friends of L’Abbaye de Lagrasse is the entity that allows U.S. based donors to make tax deductible donations to support the restoration of Lagrasse Abbey.

You can help complete the restoration of Lagrasse Abbey

Lagrasse Abbey is honored to be included as one of the 2020 Loto du Patrimoine 18 emblematic sites and is grateful for the support of Stéphane Bern as well as the abbey’s passionate supporters who make Lagrasse Abbey’s restorations possible.

Click here to read the article (in French) published by Le Figaro about Lagrasse Abbey and the Loto du Patrimoine: